From ProofWiki
< Definition:Circle
Jump to navigation Jump to search 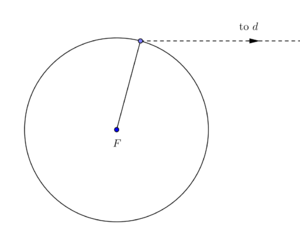 As a circle cannot be specified using the focus-directrix property, the focus cannot be defined using that technique.

Then as $e$ becomes smaller, the foci of $K$ become closer together.

In the limit, the foci coincide.

Thus the focus of the circle can be understood as being its center.

The word focus is of Latin origin, hence its irregular plural form foci.

It was introduced into geometry by Johannes Kepler when he established his First Law of Planetary Motion. The word in Latin means fireplace or hearth, which is appropriate, considering the position of the sun.

The pronunciation of foci has a hard c, and is rendered approximately as folk-eye.

Beware the solecism of pronouncing it fo-sigh, which is incorrect.