Given two infinite straight lines which are cut by a transversal, if the alternate angles are equal, then the lines are parallel. 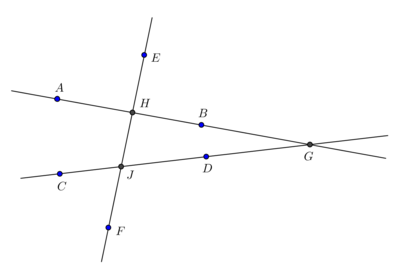 Let $EF$ be a transversal that cuts them.

Let at least one pair of alternate angles be equal.

Aiming for a contradiction, suppose that $AB$ and $CD$ are not parallel.

Then they meet at some point $G$.

Since $\angle AHJ$ is an exterior angle of $\triangle GJH$, from External Angle of Triangle Greater than Internal Opposite, $\angle AHJ > \angle HJG$, which is a contradiction.

Similarly, they cannot meet on the side of $A$ and $C$.

Therefore, by definition, $AB$ and $CD$ are parallel.

This proof is Proposition $27$ of Book $\text{I}$ of Euclid's The Elements.
It is the converse of the first part of Proposition $29$: Parallelism implies Equal Alternate Angles.