A planar graph $G$ can be assigned a proper vertex $k$-coloring such that $k \le 5$.

The proof proceeds by the Principle of Mathematical Induction on the number of vertices.

Basis for the Induction

This is our basis for the induction.

So this is our induction hypothesis:

Then we need to show:

This is our induction step:

According to the Minimum Degree Bound for Simple Planar Graph, $G_{r + 1}$ has at least one vertex with at most $5$ edges.

Let this vertex be labeled $x$.

Suppose all five colors were not connected to $x$.

Suppose all five colors are connected to $x$.

Then examine the five vertices $x$ was adjacent to.

Including the vertex $x$ in this path we get a circuit $C$. 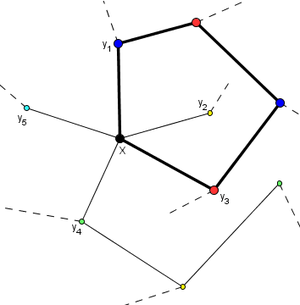 This graph illustrates the case in which the path from $y_1$ to $y_3$ can be completed.

The dotted lines represent edges and vertices that might exist, as this is simply a fairly minimal example graph that matches the conditions.

So $\map P r \implies \map P {r + 1}$ and the result follows by the Principle of Mathematical Induction.

This theorem is also known as Heawood’s Theorem, for Percy John Heawood, although The Five-Color Theorem is more widely used.

The British English spelling of this proof is five colour theorem.

The Five Color Theorem is not the strongest result possible.

In the same year he showed a flaw in Alfred Bray Kempe's supposed $1879$ proof of the Four Color Theorem which was not mended for almost another $100$ years.

It was not until $1976$ that Kenneth Ira Appel and Wolfgang Haken demonstrated that four colors suffice.

Their proof relies heavily on computers and for the moment is not to be found on $\mathsf{Pr} \infty \mathsf{fWiki}$.