That is, if and only if $f$ has a left inverse.

So from Injection if Composite is Injection, $f$ is an injection.

Note that the existence of such a $g$ requires that $S \ne \varnothing$.

Now, assume $f$ is an injection.

By definition of injection:

so it is possible to define: 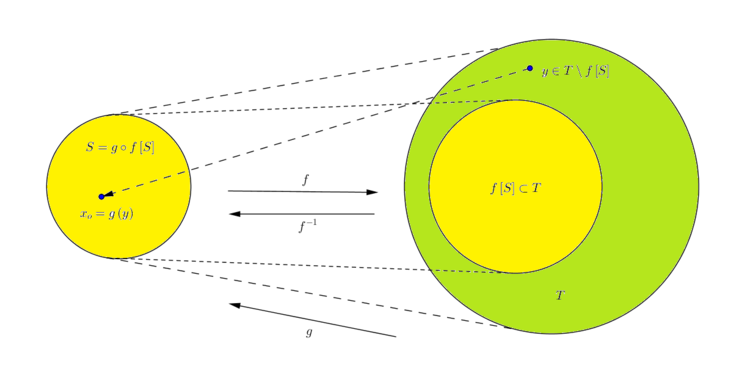 This unique element is $x$.

Law of the Excluded Middle

This theorem depends on the Law of the Excluded Middle, by way of Where?.

This is one of the axioms of logic that was determined by Aristotle, and forms part of the backbone of classical (Aristotelian) logic.

However, the intuitionist school rejects the Law of the Excluded Middle as a valid logical axiom. This in turn invalidates this theorem from an intuitionistic perspective.

Notice that it does not matter what the elements of $T \setminus \Img f$ are — using the construction given, the equation $g \circ f = I_S$ holds whatever value (or values) we choose for $g \sqbrk {T \setminus \Img f}$. The left-over elements of $T$ we can map how we wish and they will not affect the final destination of any $x \in S$ under the mapping $g \circ f$.