A mapping from $S$ to $T$ is a binary relation on $S \times T$ which associates each element of $S$ with exactly one element of $T$.

Thus, a mapping is an $n$-ary relation which is:

Many-to-one
Left-total, that is, defined for all elements in the domain.

Let $V$ be a basic universe.

In the context of class theory, a mapping from $A$ into $B$ is a relation $f \subseteq A \times B$ such that:

As a mapping is also a relation, all the results and definitions concerning relations also apply to mappings.

The preimage of $f$ is defined as:

It is a relation but not necessarily itself a mapping.

The following diagram illustrates the mapping:

Thus the images of each of the elements of $S$ under $f$ are: 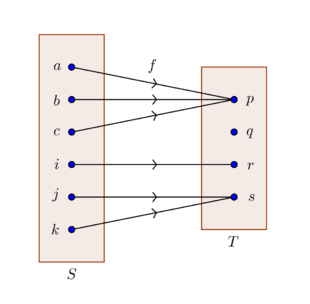 The preimages of each of the elements of $T$ under $f$ are:

The following diagram illustrates the mapping:

where $S$ and $T$ are areas of the the plane, each containing an infinite number of points. 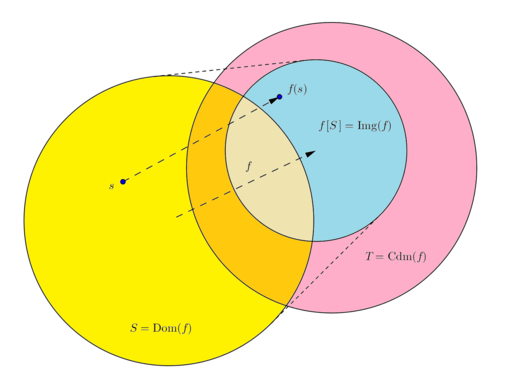 Note that by Image is Subset of Codomain:

There are no other such constraints upon the domain, image and codomain.

It can be noted that a mapping can be considered as a unary operation.

This is usually denoted $f: S \to T$, which is interpreted to mean:

This is the preferred notation on $\mathsf{Pr} \infty \mathsf{fWiki}$.

Words which are often used to mean the same thing as mapping include:

Some sources introduce the concept with informal words such as rule or idea or mathematical notion.

Some use the term single-valued relation.

Sources which go into analysis of multifunctions often refer to a conventional mapping as:

The wording can vary, for example: many-one can be seen for many-to-one.

Some approaches, for example 1999: András Hajnal and Peter Hamburger: Set Theory, define a mapping as a many-to-one relation from $S$ to $T$, and then separately specify its requisite left-total nature by restricting $S$ to the domain.

However, this approach is sufficiently different from the mainstream approach that it will not be used on $\mathsf{Pr} \infty \mathsf{fWiki}$ and limited to this mention.

Let $\Gamma$ be the Cartesian plane.

Let $f: \N \to \N$ be the mapping defined on the set of natural numbers as:

Then $f$ has an infinite image set, but is neither a surjection nor an injection.

Then $f$ is a surjection but not an injection.

Area and Circumference of Circle

Let $A$ denote the set of circles.

where $\map {\operatorname {Circ} } a$ denotes the circumference of $a$.

Let $\mathscr C$ be the set of continuous real functions defined on a closed interval $\closedint a b$.

The definite integral is a mapping which associates an element $f \in \mathscr C$ with a real number $\ds \int_a^b \map f x \rd x$.

Age of a Person

Height of a Person

Here are some supposed definitions of mappings which contain mistakes.

Image Elements not in Codomain