Natural Number is Divisor or Multiple of Divisor of Another

Any number is either a part or parts of any number, the less of the greater.

We need to show that $BC$ is either an aliquot part or aliquant part of $A$. 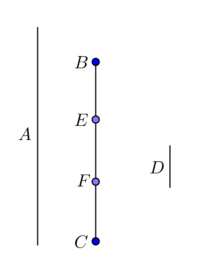 $A$ and $BC$ are either coprime or they are not.

First, suppose $A$ and $BC$ are coprime.

Then $BC$ either divides $A$ or it does not.

This theorem is Proposition $4$ of Book $\text{VII}$ of Euclid's The Elements.