Opposite Sides and Angles of Parallelogram are Equal

The opposite sides and angles of a parallelogram are equal to one another, and either of its diameters bisects its area.

In parallelogrammic areas the opposite sides and angles are equal to one another, the diameter bisects the areas. 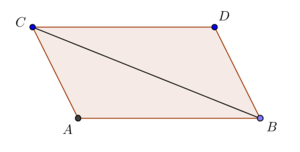 Let $ACDB$ be a parallelogram, and let $BC$ be a diameter.

By definition of parallelogram, $AB \parallel CD$, and $BC$ intersects both.

Similarly, by definition of parallelogram, $AC \parallel BD$, and $BC$ intersects both.

So $\triangle ABC$ and $\triangle DCB$ have two angles equal, and the side $BC$ in common.

So by Triangle Angle-Side-Angle Equality:

So by Common Notion 2:

So we have shown that opposite sides and angles are equal to each other.

So by Triangle Side-Angle-Side Equality:

So $BC$ bisects the parallelogram.

This proof is Proposition $34$ of Book $\text{I}$ of Euclid's The Elements.
The use of Triangle Side-Angle-Side Equality in this proof seems to be superfluous as the triangles were already shown to be equal using Triangle Angle-Side-Angle Equality. However, Euclid included the step in his proof, so the line is included here.

Note that in at least some translations of The Elements, the Triangle Side-Angle-Side Equality proposition includes the extra conclusion that the two triangles themselves are equal whereas the others do not explicitly state this, but since Triangle Side-Angle-Side Equality is used to prove the other congruence theorems, this conclusion would seem to be follow trivially in those cases.