Let $U$ be a subset of $\R^3$ which is compact and has a piecewise smooth boundary $\partial U$.

where $\mathbf n$ is the unit normal to $\partial U$, directed outwards.

By definition, the surface integral of $\mathbf V$ over $S$ is therefore defined as:

where $\rd \mathbf S$ is the differential of vector area. 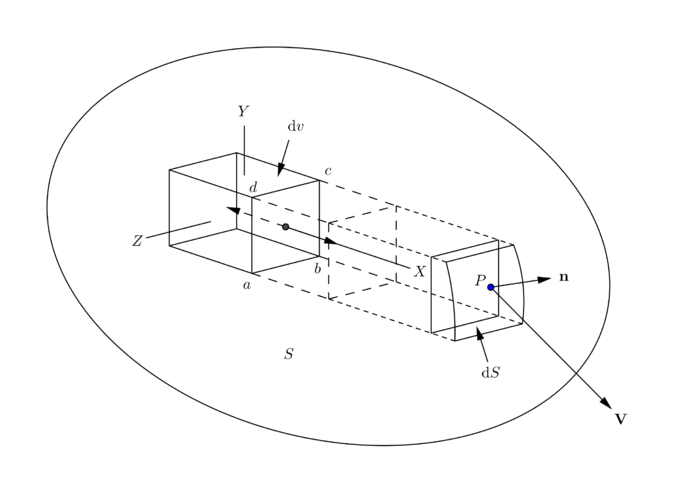 In the above diagram, a small cube has been used for convenience.

The total flux emerging from $\d v$ is:

where in this context $\mathbf V$ is the vector quantity at the center of $\d v$.

For the face $abcd$, the positive direction of the $x$ component of $\mathbf V$ and the outward normal are in the same sense, and so the flux is positive.

Consider another small cube contiguous to $\d v$, shown dotted in the above diagram.

This has the same component of $\mathbf V$, but this is acting inward, and so is negative.

This argument can be applied by imagining a sequence of such cubes until you reach the surface of $U$.

This is the only part of the construction we have just built which contributes to the flux through $S$.

By applying the same treatment to the surfaces of all such small elements of volume, we arrive at a total flux:

But at the same time we have integrated $\operatorname {div} \mathbf V \rd v$ throughout the whole of the volume of $U$.

This also measures the total flux through $S$.

and in all cases the lower subscript indicates a side closer to the origin.

This is true because each side is perfectly flat, and constant with respect to one coordinate.

Consider a closed surface $S$ within a body of fluid which at an arbitrary point $P$ is in motion with velocity $\mathbf V$.

The total rate of flow of fluid passing through $S$ can be found in $2$ different ways:

$(1): \quad$ By calculating $\mathbf V \cdot \rd \mathbf S$, which is the product of a small element of $S$ and the component of velocity which is perpendicular to it, and then adding all these contributions

$(2): \quad$ By investigating the divergence of an element of volume, which is the excess of the sources of fluid over its sinks per unit volume and integrating $\operatorname {div} \mathbf V \rd v$ throughout the volume enclosed by $S$.

These $2$ results are physically equivalent, because the excess fluid leaving $S$ over that entering must be because of the fluid injected into $B$ by the aggregate of sources and sinks.

The Gauss-Ostrogradsky Theorem is also known as:

This entry was named for Carl Friedrich Gauss and Mikhail Vasilyevich Ostrogradsky.

The Gauss-Ostrogradsky Theorem was first discovered by Joseph Louis Lagrange in $1762$.

It was the later independently rediscovered by Carl Friedrich Gauss in $1813$ during the course of his investigations into electromagnetism.

Mikhail Vasilyevich Ostrogradsky, who also gave the first proof of the general theorem, rediscovered it in $1826$.