The volume $V$ of a right circular cone is given by:

$r$ is the radius of the base
$h$ is the height of the cone, that is, the distance between the apex and the center of the base. 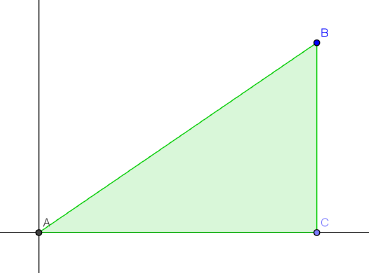 Let $A$ be located at the origin of the $xy$-plane.

By definition of tangent, the line segment $\overline {AB}$ can be described by the equation $y = \dfrac {BC} {AC} x$.

By Euclid's definition of a cone, the solid of revolution generated by rotating $\triangle ABC$ about the $x$-axis is a right circular cone:

As $\overline {AC}$ is perpendicular to the base of the cone, the height of the cone is $AC$.

This proof utilizes the Method of Disks and thus is dependent on Volume of Cylinder.

From the Method of Disks, the volume of the cone can be found by the definite integral:

where $\map R x$ is the function describing the line which is to be rotated about the $x$-axis in order to create the required solid of revolution.

In this example, $\map R x$ describes the line segment $\overline {AB}$, and so:

We have also defined:

So the equation $(1)$ is interpreted as: