Volume of Sphere/Proof by Archimedes

From ProofWiki
< Volume of Sphere
Jump to navigation Jump to search

Consider the circle in the cartesian plane whose center is at $\tuple {a, 0}$ and whose radius is $a$.

From Equation of Circle, its equation is:

Consider this circle as the cross-section through the center of a sphere which has the x-axis passing through its center, which is at $\tuple {a, 0}$.

Consider the cross-section of this sphere formed by the plane $x$ units to the right of the origin.

We can likewise interpret $\pi x^2$ as the area of the cross-section of the cone generated by revolving the line $y = x$ about the x-axis.

We write equation $(2)$ in the following form:

and we see that $\paren {2 a}^2 \pi$ is the area of the cross-section of the cylinder which has the same height and base as the cone.

These are all the intersections with the plane $x$ units from the right of the origin with the three solids of revolution described above.

Illustrated below is the intersections of these with the X-Y plane. 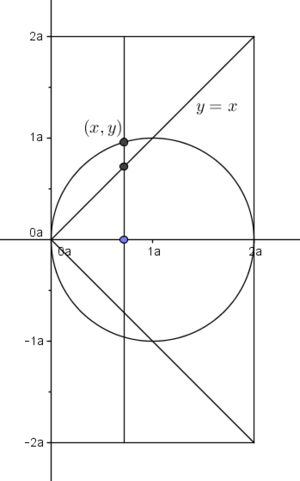 On the left hand side of equation $(3)$, the first two areas are added and multiplied by $2a$.

On the right hand side, the third area is multiplied by $x$.

Now, consider the discs themselves as bodies of constant density, so their mass (and hence weight) is proportional to their area.

Imagine the x-axis as the arm of a balance whose fulcrum is at the origin.

We leave the disc of radius $2 a$ where it is, $x$ units to the right of the origin.

Now from the Principle of Moments we see that the combined moments of the two discs on the left equals the moment of the disc on the left.

So the balance is at equilibrium.

Now for the last bit.

As $x$ increases from $0$ to $2 a$, the three cross-sections go through their respective solids and fill them.

Since, throughout this entire exercise, they are in equilibrium, so are the solids.

Democritus's Formula for Volume of Cone:

The obvious position of the center of gravity of the cylinder, that is, at $\tuple{a, 0}$

from which drops out:

The volume of the sphere was proved by Archimedes in around $250$ BCE.

His proof appears as Proposition $33$ in his On the Sphere and Cylinder.

In the version given here, the notation has been brought up to date.

He also describes in detail how he arrived at this result in The Method.

I am persuaded that this method will be of no little service to mathematics. For I can see that once it is understood and established, it will be used to discover other theorems which have not yet occurred to me, by other mathematicians, now living or yet unborn.

It can be argued that this was the point integral calculus was first invented.

Tradition has it that he asked his friends to mark his tombstone with the representation of a sphere inscribed within a cylinder, to commemorate this achievement.

This was done at the order of Marcus Claudius Marcellus, the Roman general who finally defeated the City of Syracuse in $212$ BCE.