If two triangles have two pairs of sides which are the same length, the triangle with the larger included angle also has the larger third side. 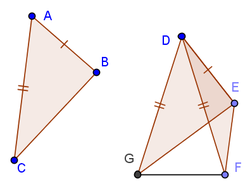 So by Euclid's fifth common notion:

Since $\angle EFG > \angle EGF$, by Greater Angle of Triangle Subtended by Greater Side:

This theorem is Proposition $24$ of Book $\text{I}$ of Euclid's The Elements.
It is the converse of Proposition $25$: Converse Hinge Theorem.