Let $a, b, c$ be another set of collinear points. 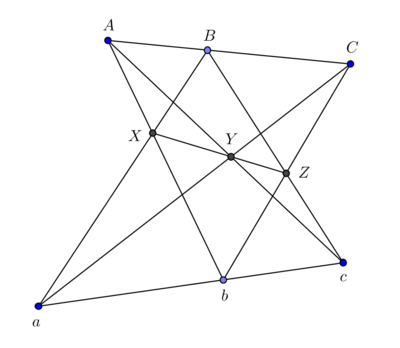 This theorem is also known just as Pappus's Theorem.

This entry was named for Pappus of Alexandria.

Pappus's Hexagon Theorem was first proved by Pappus of Alexandria in about $300$ CE.

It is noted that it is a limiting case of Pascal's Mystic Hexagram.

In $1899$ its full significance was revealed by David Hilbert, during his work on clarifying the foundations of geometry.