Let $A$ and $B$ be two points on opposite ends of the diameter of a circle.

Then the lines $AC$ and $BC$ are perpendicular to each other. 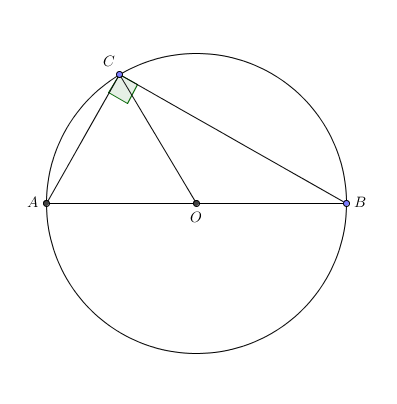 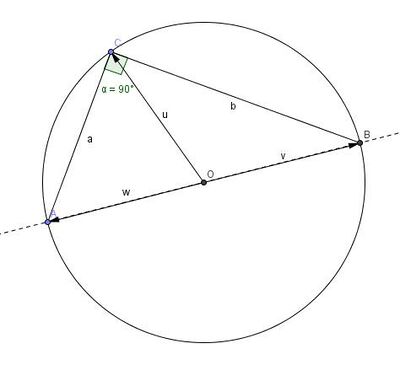 Let $O$ be the center of the circle, and define the vectors:

From Non-Zero Vectors are Orthogonal iff Perpendicular, it follows that $AC$ and $BC$ are perpendicular to each other.

Then we have that $\angle AOB$ is a straight angle.

Similarly, from External Angle of Triangle equals Sum of other Internal Angles:

This entry was named for Thales of Miletus.

This result was known by the ancient Babylonians as early as $2000$ BCE.

The proof of what is now known as Thales' Theorem that Thales of Miletus actually used is unknown. Whether he was aware of the Interior Angles Theorem and used it in his proof cannot be decided.

The Interior Angles Theorem is traditionally ascribed to Pythagoras, who lived near Thales, and may have met him.

Thus it is possible that Pythagoras learned of the Interior Angles Theorem either directly or indirectly from Thales himself.