Chord Lies Inside its Circle

If on the circumference of a circle two points be taken at random, the straight line joining the points will fall within the circle. 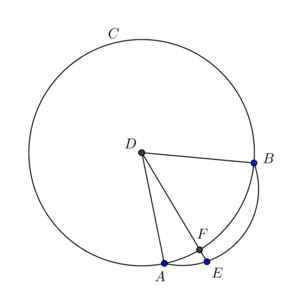 Let $ABC$ be a circle where $A, B$ are two points taken at random on its circumference.

Suppose the straight line $AB$ does not lie entirely within the circle $ABC$.

Then it will lie wholly outside (otherwise it will cross the circumference somewhere, and so we can take the part of $AB$ which does lie outside).

As $DA = DB$ then from Isosceles Triangle has Two Equal Angles it follows that $\angle DAE = \angle DBE$.

Since one side of $AEB$ of $\triangle DAE$ is produced, it follows from External Angle of Triangle Greater than Internal Opposite that $\angle DEB$ is greater than $\angle DAE$.

But from Greater Angle of Triangle Subtended by Greater Side, $DB$ is greater than $DE$.

Thus we have a contradiction.

So the straight line $AB$ does not fall outside the circle.

Similarly, we can show that $AB$ does not lie on the circumference itself.

This theorem is Proposition $2$ of Book $\text{III}$ of Euclid's The Elements.