Kepler's third law of planetary motion is one of the three physical laws of celestial mechanics deduced by Johannes Kepler:

The square of the period of the orbit of a planet around the sun is proportional to the cube of its average distance from the sun.

Consider a planet $p$ of mass $m$ orbiting a star $S$ of mass $M$ under the influence of the gravitational field which the two bodies give rise to.

From Kepler's First Law of Planetary Motion, $p$ travels in an elliptical orbit around $S$:

From Equation of Ellipse in Reduced Form: Cartesian Frame, the equation of the orbit can also be given as: 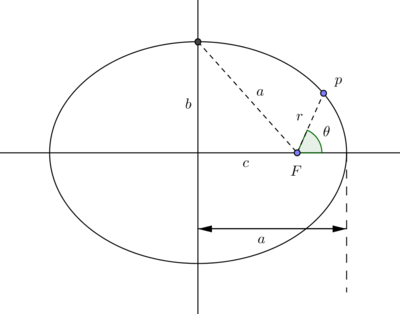 Then mean distance $a$ of $p$ from the focus $F$ is half the sum of the least and greatest values of $r$.

From Area of Ellipse, the area $\AA$ of the orbit is given by:

From Kepler's Second Law of Planetary Motion it follows that:

where $G$ is the gravitational constant and $M$ is the mass of $S$.

Then the orbital period of $P$ is: