If two circles touch one another externally, the straight line joining their centres will pass through the point of contact.

Let the circles $ABC$ and $ADE$ touch externally at $A$.

We are to show that the straight line joining $F$ to $G$ passes through $A$. 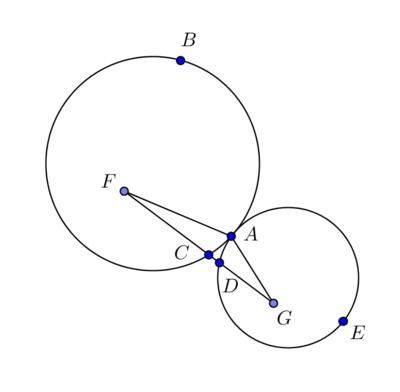 Suppose, as in the diagram above, that it does not, and that it were possible for it to pass through $C$ and $D$, as $FCDG$.

(It is clear that the diagram does not have $F$ and $G$ as the actual centers of these circles - it is the point of this proof to demonstrate that this would not be possible.)

But from Sum of Two Sides of Triangle Greater than Third Side $FA + AG$ is greater than $FCDG$.

Hence we have a contradiction, and so $FG$ has to go through point $A$, the point of contact of the two circles.

This theorem is Proposition $12$ of Book $\text{III}$ of Euclid's The Elements.