Circles Touch at One Point at Most

A circle does not touch a circle at more points than one, whether it touch it internally or externally.

Suppose it is possible for two circles to touch at more points than one. 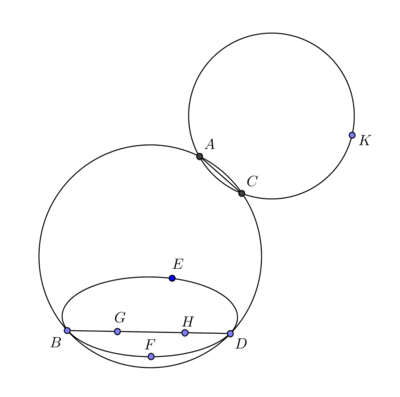 First, let the circle $ABDC$ touch the circle $EBFD$ internally at more than one point, that is, at $B$ and $D$.

(It is clear that in the diagram these centers are not actually at $G$ and $H$, and in fact $EBFD$ is obviously not a circle - it is the point of this proof to demonstrate that this would not be possible.)

From Line Joining Centers of Two Circles Touching Internally the straight line $GH$ will pass through both $B$ and $D$.

Since $G$ is the center of the circle $ABDC$, we have:

But we have just shown that $BH \gg HD$, which is impossible.

Therefore a circle does not touch another circle internally at more than one point.

Next suppose the circle $ACK$ touches the circle $ABDC$ at more points than one, that is, at $A$ and $C$, and join $AC$.

The two points $A$ and $C$ fall on the circumference of both circles $ABDC$ and $ACK$.

So it follows from Chord Lies Inside its Circle that $AC$ lies with both circles.

But from Book $\text{III}$ Definition $3$: Tangent Circles this line would fall inside $ABDC$ and outside $ACK$.

This reveals a contradiction.

Therefore a circle does not touch another circle externally at more than one point.

This theorem is Proposition $13$ of Book $\text{III}$ of Euclid's The Elements.