Then the straight line joining their centers passes through the point where they touch.

If two circles touch one another internally, and their centres, the straight line joining their centres, if it be also produced, will fall upon the point of contact of the circles.

Let the circles $ABC$ and $ADE$ touch internally at $A$.

We are to show that the straight line joining $F$ to $G$ passes through $A$. 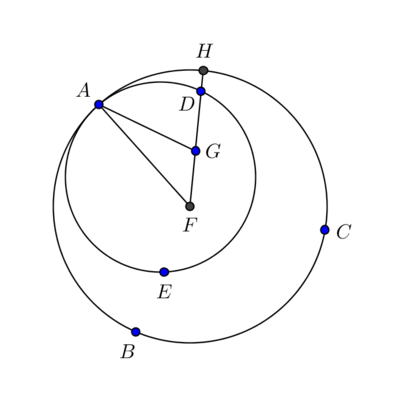 Suppose, as in the diagram above, that it does not.

It will also pass through $D$ on its way, which lies on circle $ADE$.

From Sum of Two Sides of Triangle Greater than Third Side $AG + GF$ is greater than $AF$.

So the $AG + GF$ can not be greater than $AF$ and so must be coincident with it.

This theorem is Proposition $11$ of Book $\text{III}$ of Euclid's The Elements.