Two Circles have at most Two Points of Intersection

A circle does not cut a circle at more points than two. 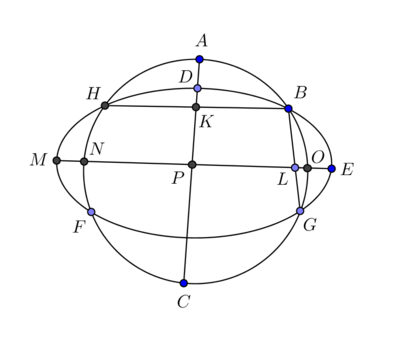 Clearly, in the diagram, circle $DEF$ is not actually a circle. For the sake of demonstrating a contradiction, we suppose that it is.

Since $AC$ cuts $BH$ into two equal parts at right angles, from the porism to Finding Center of Circle, the center of circle $ABC$ is on $AC$.

For the same reason, the center of circle $ABC$ is also on $NO$.

Similarly, we can show that $P$ is also the center of circle $DEF$.

So we have two circles that intersect which have the same center.

From Intersecting Circles have Different Centers, this statement is contradictory.

Hence such a pair of circles, i.e. those that intersect at more points than two, can not exist.

This theorem is Proposition $10$ of Book $\text{III}$ of Euclid's The Elements.