Alternatively, from Equivalence of Definitions of Dominate (Set Theory), this can be expressed as:

This theorem states in set theoretical concepts the "intuitively obvious" fact that if $a \le b$ and $b \le a$ then $a = b$.

Care needs to be taken to make well sure of this, because when considering infinite sets, intuition is frequently misleading.

In order to prove equivalence, a bijection needs to be demonstrated.

It can be significantly simpler to demonstrate an injection than a surjection.

Now we can represent $S$ as:

Similarly, we can represent $S_1$ as:

By Law of Excluded Middle there are two choices:

Again, by Law of Excluded Middle there are two further choices:

This process goes on until one of the following happens:

The process goes on for ever.

For each $t \in T$, then, there is a well-defined process which turns out in one of the above three ways.

We partition $T$ up into three subsets that are mutually disjoint:

We can do exactly the same thing with the elements of $S$:

To do this we need to show that:

Then the process applied to $s$ ends in $S$.

Its first step leads us back to $s$.

Then it continues the process, applied to $s$, and ends up in $S$.

Then the process applied to $t$ ends in $S$.

In particular, it must have a first stage, otherwise it would end in $T$ with $t$ itself.

We can use the same argument to show that $g: T_B \to S_B$ is also a bijection.

Now we can define a bijection $h: S \to T$ as follows:

The fact that $h$ is a bijection follows from the facts that:

which follow directly from the definition of relative complement.

Consider the mapping $z: \powerset S \to \powerset S$ defined by the composition:

$z$ is an increasing mapping

By the Knaster-Tarski Lemma: Power Set, there is a $\mathbb G \in \powerset S$ such that:

At this stage, a diagram can be helpful: 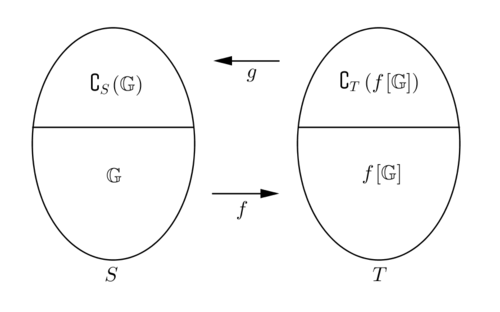 From the above, we have that:

Using $f$ and $g$, $S$ and $T$ are divided into disjoint subsets such that there exists a bijection between the subsets of $S$ and those of $T$, as follows.

Then we define the elements of $S$:

and the elements of $T$:

This construction is valid for all $n \ge 1$, but note that some of the $a_n$'s may coincide with others.

We set up a similar construction for negative integers:

We are given that $f$ and $g$ are injections.

It follows that a bijection can be constructed from $\AA_S$ to $\AA_T$.

Now there are two different kinds of $\sqbrk a_S$ sets:

By the method of construction it can be seen that $\sqbrk a_S$ and $\sqbrk a_T$ are both countably infinite.

Thus we can set up a bijection:

It follows that a bijection can be constructed between any two elements of the partitions of $S$ and $T$.

These maps then automatically yield a bijection from $S$ to $T$.

By Injection to Image is Bijection:

By Composite of Injections is Injection $g \circ f: S \to g \sqbrk T \subset S$ is also an injection (to a subset of the domain of $g \circ f$).

Then by Cantor-Bernstein-Schröder Theorem: Lemma:

We already know that $T$ is equivalent to $g \sqbrk T$.

By the definition of set equivalence:

By the Knaster-Tarski Lemma, $E$ has a fixed point $X$.

By the definition of fixed point:

Thus by the definition of $E$:

By Injection to Image is Bijection, $f'$ and $g'$ are both bijections.

By the corollary to Union of Bijections with Disjoint Domains and Codomains is Bijection:

By Union with Relative Complement, $h$ is a bijection from $A$ onto $B$.

Law of the Excluded Middle

This theorem depends on the Law of the Excluded Middle.

This is one of the axioms of logic that was determined by Aristotle, and forms part of the backbone of classical (Aristotelian) logic.

However, the intuitionist school rejects the Law of the Excluded Middle as a valid logical axiom.

This in turn invalidates this theorem from an intuitionistic perspective.

Cantor first attempted to prove this theorem in his $1897$ paper.

Ernst Schröder had also stated this theorem some time earlier, but his proof, as well as Cantor's, was flawed.

It was Felix Bernstein who finally supplied a correct proof in his $1898$ Ph.D. thesis.