The cosine of $\angle \theta$ is defined as being $\dfrac {\text{Adjacent}} {\text{Hypotenuse}}$. 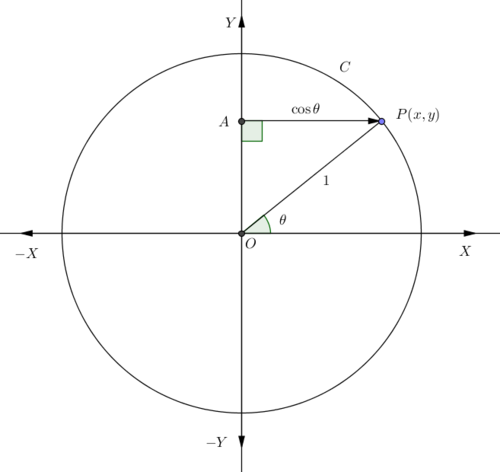 Then the cosine of $\theta$ is defined as the length of $AP$.

Hence in the first quadrant, the cosine is positive.

The the symbol $\cos$ for cosine appears to have been invented by William Oughtred in his $1657$ work Trigonometrie, although some authors attribute it to Euler.

As with sine, the word cosine derives (erroneously, via a mistranslation) from the Latin sinus which (among other things) means fold, curve, winding or bay.

The co- prefix, as with similar trigonometric functions, is a reference to complementary angle: see Cosine of Complement equals Sine.

It is pronounced with the emphasis on the first syllable: co-sign.

$\cos x$ is voiced cosine (of) $x$, or (as written) cos $x$ (pronounced either coss or coz depending on preference).