On all the number systems:

the operation of multiplication is associative:

If a first magnitude be the same multiple of a second that a third is of a fourth, and if equimultiples be taken of the first and third, then also ex aequali the magnitudes taken will be equimultiples respectively, the one of the second and the other of the fourth.

This can also be expressed as:

This is demonstrated in these pages:

Therefore as many magnitudes as there are in $EF$ equal to $A$, so many also are there in $GH$ equal to $C$. 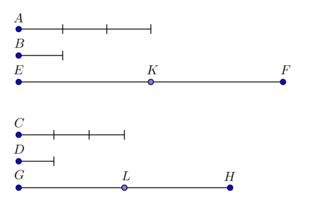 So we have that:

Therefore the sum of the first and fifth, $EF$, is also the same multiple of the second $B$ that the sum of the third and sixth, $GH$ is of the fourth $D$.

This theorem is Proposition $3$ of Book $\text{V}$ of Euclid's The Elements.