It can be seen that, in this form, $\cup$ is a binary operation which acts on sets.

Thus the general union of two sets can be defined as:

Let $I$ be an indexing set.

The union $S \cup T$ of the two sets $S$ and $T$ is illustrated in the following Venn diagram by the red area: 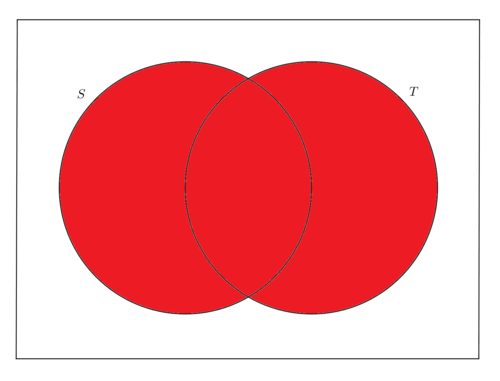 The concept of set union is axiomatised in the Axiom of Unions in various versions of axiomatic set theory:

For every set of sets $A$, there exists a set $x$ (the union set) that contains all and only those elements that belong to at least one of the sets in the $A$:

The union of sets is also known as the logical sum, or just sum, but these terms are usually considered old-fashioned nowadays.

The term join can also be seen, but this is usually reserved for specific contexts.

Some authors use the notation $S + T$ for $S \cup T$, but this is non-standard and can be confusing, so its use is not recommended.

Example: People who are Blue-Eyed or British

The concept of set union, or logical addition, was stated by Leibniz in his initial conception of symbolic logic.

The symbol $\cup$, informally known as cup, was first used by Hermann Günter Grassmann in Die Ausdehnungslehre from $1844$.

However, he was using it as a general operation symbol, not specialized for set union.

It was Giuseppe Peano who took this symbol and used it for union, in his $1888$ work Calcolo geometrico secondo l'Ausdehnungslehre di H. Grassmann.